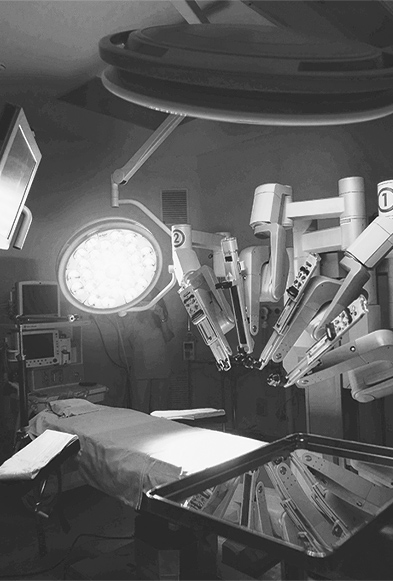 Modern equipped operating theaters are a normal practice for any good medical center. We are a step ahead of the rest: surgeries in the Clinical Diagnostic Center MEDSI on Krasnaya Presnya are performed using the unique Da Vinci robot-assisted surgical system.

Robot-assisted surgery in MEDSI is complex manipulations through small incisions, minimal invasiveness, reduced risk of postoperative complications, and quick recovery after the intervention.

Before its creation, medical engineers tested about 2,000 less successful models. State-of-the-art da Vinci robotic surgical system is a high-tech result of 30 years of work with the participation of hundreds of specialists. This system is available in only a few hundred clinics worldwide, and MEDSI is one of the only owners of this system in Russia.

The device system of the surgical console, where the surgeon is located, and the operative part, patient’s cart, which directly performs surgical manipulations.

The operative part has four “hands”: one keeps video recording the surgery, the other two function as the arms of the first surgeon and carry out main manipulations, the latter one serves as an assistant (for example, “responds” to expansion and retention of the wound edges).

The da Vinci robot-assisted system is successfully used in:

All disorders from the listed areas that require surgery are successfully treated using robotic surgery. How is a robot-assisted surgery performed?

The patient undergoes investigations, indications for surgery are determined and the intervention technique is selected. After that the patient is prepped for the surgery, brought into the operating room and anesthetized.

The operative part of the robot is located directly near the operating table. The robot performs all the “orders” received from the surgical console with the highest precision, which ensures the utmost accuracy and technicality of all stages of the intervention. The system is managed by a highly skilled surgeon who is also in the operating room. The patient’s condition during the operation is continuously monitored by an anesthesiologist.

After completion of the surgery, the patient spends a day in intensive care unit and then he is transferred to a regular hospital ward until discharge.

Benefits of robot-assisted surgery in MEDSI

MEDSI is one of the few Russian clinics that use the possibilities of robot-assisted surgery.

In MEDSI, we use Fast Track Surgery principle. Our goal is to provide a patient with the highest quality medical services for their speedy recovery. Robotic surgery helps our patients to heal effectively and return quickly to their normal lives.